Do wisdom teeth cause teeth crowding?

Do wisdom teeth cause teeth crowding? 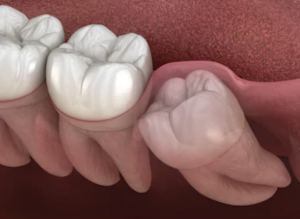 Why do we have wisdom teeth?

Wisdom teeth are a third set of molars which erupt toward the end of skeletal growth; typically around age 16 to 18; hence, their name. They are not all the time present, and occasionally they’re missing all together.  They are an evolutionary organ; meaning at some point in evolutionary history they were functional, and throughout evolution, they lost their functionality. But why? one theory is that diet is the answer. We think our ancestors consumed foods composed of mostly meat which is much harder to chew, requiring larger jaws and stronger jaw muscles. Their large jaws accommodated more teeth including a third set of molars.

What is the problem with wisdom teeth?

In 1961, orthodontist Leroy Vego, published an article, “A Study of Mandibular Arch Perimeter” which examined the role of wisdom teeth on lower incisor crowding. Vego evaluated stone models of 65 individuals; 40 individuals with lower wisdom teeth present and 25 patients with missing lower wisdom teeth (congenitally absent) over six years from ages 13 to 19. He reported that there was a significantly greater degree of crowding in [those individuals] with wisdom teeth. Vego concluded: “that the erupting lower third molar can exert a force on approximating teeth.”

From that statement, the theory formulated that lower wisdom teeth “push” the teeth in front of them as they come into the mouth, contributing to incisor crowding. As such, general dentists, orthodontists, and oral surgeons recommended the prophylactic extraction of these teeth to prevent against the relapse of crowding after orthodontic treatment.

What about recent studies?

A lot of studies exist today, which contradict Vego’s theory that wisdom teeth exert enough pressure on teeth to move them forward. In fact, numerous elements play a role in crowding, irrespective of whether the individual has these teeth. Most notably, lower incisors tend to drift forward through the bone in the direction of our main chewing muscles (masseter and temporalis). Additionally, bone is continually remodeling and bone in the lower anterior region happens to resorb throughout life. Other factors such as tooth-size, tooth-shape, and original tooth-position also play a significant role. Despite this, removal of these teeth is still encouraged in many situations such as, malpositioned teeth may develop cavities, gum inflammation (pericoronitis), root resorption of the second-molar, cysts or tumors, impede orthodontic tooth movement.

Are they always useless?

Not always! Sometimes wisdom teeth are fully erupted and in good bite relationship so that they’re fully functional in chewing. Sometimes, this tooth can be used as abutment for a future bridge, or to replace a missing tooth in orthodontics.

When is the right time to have mine or my child’s wisdom teeth removed?

Consult our Periodontist Dr.Miski, he will monitor the wisdom teeth and make the optimum decision based on the tooth position, growth, bite relationship, and space considerations.